There is a lot written about the things you can’t do as a parent. (Mostly because those adorable children cramp our style. Yep, they are real buzzkills.) However, no one ever talks about the stuff that you can only do because you have kids.

Let me tell you about some unexpected perks of being a parent. No, not unconditional love and all that crap. You probably know about that anyway.

Here are some things I can do now that I have a kid:

I can go to the splash pad!

As many of you know, I live next to a park. I wrote about the pros and cons of that in this post. Anyway, our park has a big sign that says “no adults without children”. So even though I live right next to it, I did not go in the splash pad before my son was born. I like to follow the rules…mostly. So, finally after 7 years, I am hitting up the splash pad. My son is still not so sure about it, but mama is having fun! 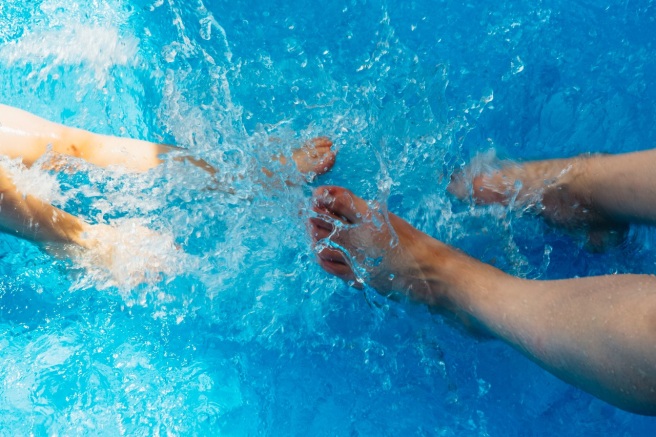 I never got to go to Disney Land as a kid. (I know, cue the sympathy.) Unless you are a huge Disney super-fan, I think there is a window of time you can travel there. You either need to be a kid or have a kid. Teenagers are less interested and when you are an adult, you have other destinations in mind. Luckily I now have a kid, so I can start planning my vacation to Disney. If I ever get the nerve to take the baby back on the plane after the last flight.

In a perfect world, I would eat dinner at 5:30 every night. I blame this on my job as a teacher because we have to scarf half a lunch at 11 am. I start getting hungry at 4 pm, but push it to 6 most days. I don’t want to eat late damn it, I want to eat early with the old people and young families. Since I have a kid, now I can. How sweet it is. If you want to read more about how I hate eating late, check out my guest post here.

Talk to myself in public under the guise of talking to the baby:

10 years ago if you were out talking to yourself in public you were weird. People would cross the street to avoid you.  Now no one even looks twice because you are probably on the phone. Being a child of the 90’s, I still feel the stigma of talking to myself in public. Enter baby. Now I can chat away in public and periodically look at the baby and it’s all good. Check out what I talk to my baby about here.

Just sit down in random places:

Kids love that, don’t they? They don’t want to sit on a picnic blanket, bench or chair, but they are all over sitting on the sidewalk or someone’s front lawn. Since my dog is already camped out on that random lawn eating grass, I am out numbered. Why should I stand like a sucker? Nope, I’m sitting down. You may see me on your lawn this summer. Don’t worry, I can bring cookies, if that helps.

Okay, I think these get a bad rap. Yes, some are terrible but some are hilarious. People would think it was strange if I just started watching a kid’s show before having a kid, but now it is expected. Who’s up for a TV viewing party at my house? We’re binge-watching the Octonauts. Bring snacks.

Get out of things I don’t want to do:

Not that I’ve done that. But hypothetically, I could use the baby as an excuse for not attending and event that is too long or far away for the baby to handle. Again, hypothetically I could also use my child to avoid social engagements I do not want to go to. The baby could be sick, tired, teething, grumpy, going through a growth spurt or have a weird rash. But I would never do that for your event. I really did want to go to that, but my baby has this strange cough… Bummer.

What are the things you can do, now that you have a kid?